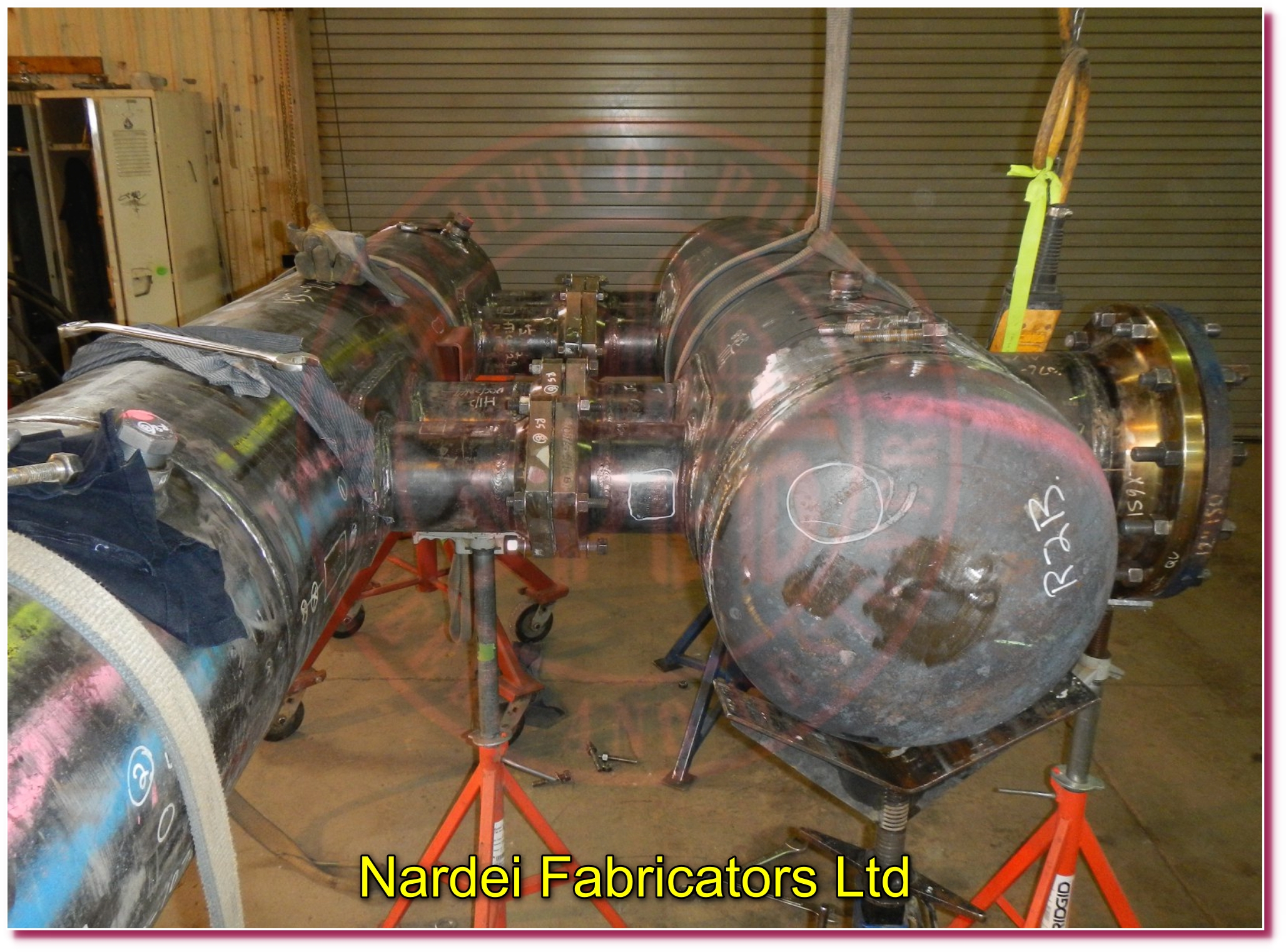 Holds in pipe fabrication are often contentious and misunderstood. In this article, the term “hold” is used to describe the act of removing a spool piece from the fabrication cycle and preventing further work on the affected spool until the “hold” is “released”. “Released” means fabrication on this piece can resume.

A hold can be an instruction from a client to stop work on a piece or group of pieces, or it can be a result of the client issuing a change to the piece, with the fabricator putting the piece on hold while the changes are processed. We will describe some of the challenges created by holds caused by the client after the contract has begun, resulting in increased costs charged by the fabricator.

Typically the client communicates their design by providing drawings and specifications to the fabricator. Usually the pricing for completing the pipe fabrication on the project is fixed, either by one fixed lump sum for the entire project, or by fixed unit rates for each type of labour operation (and materials -depending on the type of contract) anticipated for use on the project. In a competitively bid project, the fabricator is providing pricing that will cover costs to fabricate pipe spools that comply with the drawings and specifications issued by the client and yield a profit. The fabricator must do this while keeping the price as low as possible in order to successfully be awarded the work. This requires the fabricator to perform the work as efficiently as possible to keep costs at a level where they can compete on price. Once the contract is awarded, the potential for the fabricator to turn a profit is entirely dependent on their efficiency in executing the work, as the amount of revenue available, barring no changes, is fixed.

In order to be as efficient as possible, a pipe spool fabricator normally would have the fabrication process set up as an “assembly line”. Most people understand what an “assembly line” means, but in custom pipe fabrication, there is an additional complication. That is, typically each spool piece is different, so the “assembly line” is configured to deal with the uniqueness of each spool. As a result, the tracking of individual spools is specific. Certain attributes of the spools, such as size, material type and assembly diameter inches/manhours can be described in the aggregate, but in the end, each spool is unique in where it fits in the design, fabrication, and schedule.

The basis for the communication of each spool piece’s requirements is the drawing. Different shops use this information in different ways to maintain efficiency and schedule predictability.

Material availability also affects planning and efficiency. In a material shortage situation, the fabricator must have the ability to allocate scarce materials to spools in a manner that allows fabrication to progress in the most efficient manner, while meeting pre-established criteria for deciding the sequence of spool piece manufacture.

A client will want progress reports for some or all of the fabrication phases on a regular basis. Of course, the fabricator needs to track information on spool status in each phase of fabrication. This becomes very important for the client and the fabricator as the job increases in size. Many jobs involve hundreds or even thousands of spool pieces.

The nature of this production flow and status reporting lends itself to systematic treatment and automation of at least some phases. The planning of fabrication for each piece before it reaches the shop floor is important. The more planning that is done before fabrication starts, the more efficient the assembly line is. This is key in understanding the impact of holds.

In order to correctly monitor cost and schedule for each piece, status of each piece must be reliable. Some shops are more sophisticated than others in this regard. This is important in the event of the client issuing a hold on a piece or number of pieces, to minimize the time delay between receipt of the hold notice and the piece actually being “held”. Note that the client may not issue a hold per se but may issue a revised drawing(s) that will result in a hold by the fabricator until the revised information can be sent into production.

The impact of any hold is significant because of the nature of the fabrication process.

Anything that interrupts the fabrication “flow” causes extra administration, handling and scheduling, all of which adds to completion time and cost.

One of the impacts of a client hold notice often overlooked is that, once a hold is issued, each held piece requires personal attention to manage the piece, as opposed to standardized operating procedures in a normal fabrication cycle. This adds to the administration cost attributable to a normal spool piece. The following paragraphs illustrate examples of additional administration costs.

The hold itself must be managed, that is, tracked and reported. Besides showing in an overall report as a summary of spools “held”, the status of each hold is normally documented and “statused” individually. This must be done on a spool by spool basis, as release of holds will not necessarily be done in a predictable sequence. Spools that were held in a group by one notice, may not be released as a group. This may be due to lack of material in the event of a design change, not necessarily due to how the hold was released by the client.

While each spool affected is on hold, not only does individual status up to the hold point need to be documented, but aggregate reporting numbers, (such as total pieces and diameter inches/manhours in various stages of manufacture), have to be reworked to account for the hold. So aggregate numbers in drafting, waiting for materials, cutting, fitting, welding, checking or post welding operations need to be updated to account for the change of aggregate quantities in any affected phase. 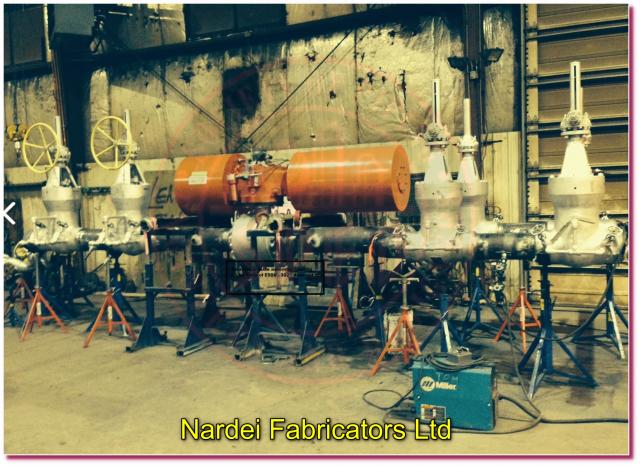 The status of each spool piece put on hold will determine the severity and cost of impact of the hold. For example, a spool piece put on hold while in drafting will require administration, file handling, drawing quarantine and reporting, but will not be as costly as a spool that was in production on the shop floor, which will have to be physically flagged and likely handled to move to a “quarantine area” until the hold is resolved, even if the ultimate result is a hold release with no change. The “quarantine area” is required so that a spool that cannot be finished due to a hold does not occupy valuable “real estate” on the assembly line. This implies a storage component to the overall cost of a hold, especially if the hold results in the spool being resident at the fabrication facility longer than the average “production time”.

There are only three outcomes occurring after a hold is released:

- No change to the spool
- Revised spool
- Cancelled spool

Regardless of which outcome, even with no change, when the hold is released, all the processes required to “hold” the spools now must be performed in reverse, documented, and accounted for.

Schedule will also be lengthened, at least to the extent of the duration of the hold, and, at worst, by delays in feeding the affected spool piece (or pieces) back into production, given that the production sequence will have to be re-organized to create a “spot” for the piece depending on the client’s priority requirements or effects on fabrication efficiency.

In the case of revision to a spool on hold, the additional step of documenting the changes and possible change in requirements for material, as well as potential for rework of a spool already on the shop floor, must be added to the release process. This will affect drafting, material control, fabrication, and completion schedule, increasing the impact and resultant cost.